The MCU320D is a modified MCU terminal that has been designed and configured for NAWAS operation.

The MCU320N adds an audible and visual alert feature to our MCU320B Terminal. This alerting feature is activated by a Control Unit on the circuit. 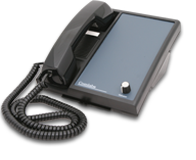 The MCU320B is best suited for “hoot and holler” type arrangements where users listen to traffic on the circuit over the built-in or accessory speaker, and pick up the handset when they wish to speak to others on the circuit. No backroom equipment is required to create the circuit.

The MCU320S is a terminal for use in the FAA network. Typically supplied with an FAA custom overlay.